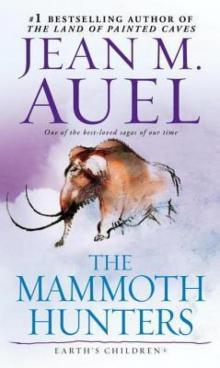 Read Online
This eBook includes the full text of the novel plus the following additional content:
• An exclusive preview chapter from Jean M. Auel’s The Land of Painted Caves, on sale in hardcover March 29, 2011
• An Earth’s Children® series sampler including free chapters from the other books in Jean M. Auel’s bestselling series
• A Q&A with the author about the Earth’s Children® series
Ayla, the independent heroine of The Clan of the Cave Bear and The Valley of Horses, sets out from the valley on Whinney, the horse she tamed. With her is Jondalar, the tall, handsome, yellow-haired man she nursed back to health and came to love. Together they meet the Mamutoi--the Mammoth Hunters--people like Ayla. But to Ayla, who was raised by the Clan of the Cave Bear, they are “the Others.” She approaches them with mixed feelings of fear and curiosity.
Talut, a powerful bear of a man with bright red hair, a booming laugh, and a gentle heart, and his tall, dark-haired sister, Tulie, are the leaders of the Lion Camp of the Mamutoi. It is here that Ayla finds her first women friends, but some among the Mamutoi dislike Ayla because she was raised by “flatheads,” their name for the people of the Clan. Ayla is haunted by her memories of the Clan because Rydag, a child of mixed parentage living with the Mamutoi, bears so strong a resemblance to her own son, Durc.
It is the Mamutoi master carver of ivory--dark-skinned Ranec, flirtatious, artistic, magnetic--who fascinates Ayla. She finds herself drawn to him. Because of her uncanny control over animals, her healing skills, and the magic firestone she discovered, Ayla is adopted into the Mammoth Hearth by Mamut, the ancient shaman of the Great Earth Mother.
Ayla finds herself torn between her strong feelings for Ranec and her powerful love for the wildly jealous and unsure Jondalar. It is not until after the great mammoth hunt, when Ayla’s life is threatened, that a fateful decision is made.
Set in the challenging terrain of Ice Age Europe that millions of Jean Auel’s readers have come to treasure, The Mammoth Hunters is an epic novel of love, knowledge, jealousy, and hard choices--a novel certain to garner Jean Auel even greater acclaim as a master storyteller of the dawn of humanity.