Jealousy and in the Labyrinth Read online

Jealousy and in the Labyrinth 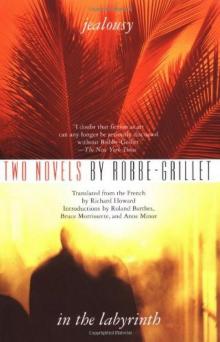 Published: a long time ago

Read Online
From the Inside FlapHere, in one volume, are two remarkable novels by the chief spokesman of the so-called "new novel" which has caused such discussion and aroused such controversy. "Jealousy," said the New York Times Book Review "is a technical masterpiece, impeccably contrived." "It is an exhilirating challenge," said the San Francisco Chronicle. The Times Literary Supplement of London called Robbe-Grillet an "incomparable artist" and the Guardian termed Jealousy "an extraordinary book." In his native France, leading critic Maurice Nadeau wrote in France-Observateur that "In the Labyrinth is better than an excellent novel: it is a great work of literature," and fellow novelist and critic Claude Roy judged the same work Robbe-Grillet's "best book," while here in America the "Parade of Books" column called In the Labyrinth "a highly emotional experience for the reader" and went on to predict: "Robbe-Grillet will take his place in world literature as a successor of Balzac and Proust." This volume, which offers incisive essays on Robbe-Grillet by Professor Bruce Morrissette of the University of Chicago and by French critics Roland Barthes and Anne Minor, also contains a helpful bibliography of writings by and about the author. Alain Robbe-Grillet was born in 1922 in Brest, France. The Erasers, his first novel, was published in 1953, and as his next novels appeared--The Voyeur in 1955, Jealousy in 1957, In the Labyrinth in 1959, and La Maison de Rendez-vous in 1965--his importance as the chief spokesman for the noveau roman became apparent. He gives his own theories of the novel in a collection of essays, For a New Novel. Robbe-Grillet wrote the film script for Last Year at Marienbad.